Welcome to my blog. This will be a series of stories, observations and reminiscences about one person's long career as an agency and freelance copywriter and creative director. Enjoy.

In the movie Kramer Vs. Kramer, Ted Kramer (Dustin Hoffman) was an advertising copywriter, just like me. Among the many props adding a Madison Avenue verisimilitude to his office was a neon sign of his last name. If you saw the movie, you probably didn’t notice it. But I did. Because I had one, too. Lots of  agency copywriters, art directors and producers in the late ‘70s had them. They were a well-known Christmas gift from the commercial production company Gomes-Lowe. They were given to teams who used either George Gomes or Dick Lowe to direct their commercials that year. It was a very nice thing and, miraculously, I still have mine all these years later. 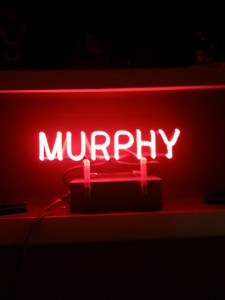 I bring this up because George Gomes, in addition to being a very nice man, was an extraordinarily talented director, one of the best in the business at the time. He directed many well-known commercials such as the Alka-Seltzer “I Can’t Believe I Ate the Whole Thing.” I had worked with him several times before and wanted him to direct this new commercial that had just been approved by AT&T Long Distance.  Yes, long distance used to be something special. It was “the next best thing to being there.” The commercial was part of a campaign advertising low rates for international calling. They were featuring low rates to three countries, one of which was Israel. It was a plum assignment.

I forget what the other two countries were, but I’ll never forget the one we did for Israel. To me, it is still the best commercial I ever wrote. My partner, Dan Long, and I were dusting off places in our offices for the Clio statues, the One Show pencils, and who knew what other hardware. Alas, there were to be no awards. The commercial never ran on television, because the B’nai B’rith Anti-Defamation League deemed it to be offensive.  And, of course, AT&T had no interest in going against them.

What was so offensive? Well, you be the judge. The commercial was very simple. We had a lovely middle-aged couple having dinner in their Queens apartment.  Between bites, they have a conversation.

(AS IF NOTHING HAD HAPPENED) So … how is she?

It was a gentle spot, and everybody at the agency and client loved it. It was perfect for the directorial touch of George Gomes. We were all excited about the possibilities. The casting was brilliant. We got two very well-known actors who had been mainstays in the Yiddish theater in the Catskills, and were perfect.  Their performances were very sweet. They were very, as the phrase goes, New York ethnic. The shoot went flawlessly. As for the editing, it virtually cut itself. If there were acceptance speeches at the Clios, I would have been rehearsing mine.  Then … then we had to cast the voice over for the final announcer line — AT&T … the next best thing to being over there.

As always, we auditioned several voice-over actors, many of them Jewish. One of them was an actor named Herschel Bernardi, another Yiddish theater veteran and a portrayer of Tevye in Fiddler on the Roof. Like all the other announcers, to read this line, he viewed the whole commercial before reading doing his part. But unlike any of the others, his reaction was — What’s this? Jews concerned about the cost of an international phone call! That’s anti-Semitic stereotyping. I’m going to call the Anti-Defamation League.

Soon, the B’nai B’rith representatives trudged up to the NW Ayer offices, screened the commercial and promptly pronounced themselves offended. I suspect that they came prepared to see something offensive and viewed the commercial in the most sensitized way possible.             AT&T, of course, was in a complete no win situation. I’m sure it didn’t help that neither myself, nor my art director partner, nor the agency creative director, client, nor director were Jewish. The actors were, to be sure. As well as our choice to do the actual voice over reading.  But the damage was done, and it really hurt.  What really hurts is that Herschel Bernardi wouldn’t have gotten the gig anyway; he wasn’t right.

I still think that this is a commercial that respects people and simply touches a human reaction that anybody would have. Did we unconsciously embrace a stereotype? Maybe. But Herschel Bernardi’s holier-than-thou attitude still makes me mad. Especially when I remember that George Gomes wrote him a letter reminding him that he was once the voice of Volkswagen, once, the official car of Nazi Germany.

AT&T did another international calling campaign next year. But the people who worked on it were much smarter than me. They set the commercials on the other end of the call and got a great trip to Europe.

← Thank You For Your Service